Romancing the stone, from Monte Carlo to Noosa

A Noosa-based craftsman who once worked on ancient cathedrals of Europe,  lavish homes in Monaco, Paris, St Tropez, Switzerland, etc. is sharing his love for restoring stone to Noosa. He also has worked in celebrities' homes such as Christopher Skase, and some of the most iconic buildings in Brisbane.

Stonemason Patrick has a thick, romantic, French accent and the air of a master artist from Europe. His canvas is stone.

Patrick’s hands have worked on 800-year-old European churches where no modern techniques can be used; the ancient craftsmanship so precise, so beautiful, it takes years of special training to be able to restore and maintain it.

An interest in his youth led to training with his uncle on the Gold Coast who is from a line of generations of family stonemasons.

This career then led him to Europe where he was given the great honour of being personally invited to undertake a 7-year apprenticeship with the prestigious Companion du Devoir.  A rare opportunity many could only dream of.

During his career Patrick worked with the rarest of stone and on jobs that could only be described as magnificent.

From the Versace Hotel, Sheraton Mirage, Tattersall's Club and Commonwealth Bank – with their 30-metre-wall – in Brisbane to the Jupiter Hotel, CaixaBank in Monaco, and incredibly decadent bathrooms all over the world, he remembers them all and the stone from each has a story.

As a stonemason Patrick developed a love-affair with stone and, like all artists, a deep appreciation of where his materials and inspiration come from. Important to Patrick is how much of various types of stone are left on our planet and how we treat the stone already unearthed.

As a dedicated and passionate stonemason, he knows the damage that is done when we excavate a stone until it is all gone. That we often have the habit to replace rather than restore in our buildings and homes.

“When you understand the history and quality of these materials you appreciate how old some of them are, and the beauty unearthed when they are properly maintained.” Says Patrick.

“My focus now is to rejuvenate marble.

“Some travertine in Noosa has been there 10, 15 years, and because of the build-up of dirt in Travertine, it just looks terrible to the average eye. I see the stone. I bring it back to new; I take a millimetre or two of the top and polish it to perfection.

Patrick says a lot of people just see a floor that has not been maintained and decide to replace it, throw it away, but the stone itself is still exquisite underneath, just as it once was.

“When you understand stone working on 600-year-old masterpiece buildings in Europe you know that beautiful stone, all stone, needs to be maintained and restored and can be ethereally stunning once again.

“Travertine is a great stone, and it takes millions of years to be, but after being in a house for just 7-8 years in Noosa, because it looks dirty at first look, people often just think to get rid of it.”

Not only is that a huge and unnecessary expense according to Patrick, but it is also an awful end for the beautiful travertine itself that took eons to be.

“If you take a jack hammer to it, it’s gone,” he says sadly.

“If you look at the cost of that too, taking it out and replacing, it's huge, but we also have to stop taking all this stone without thought from the Earth too.” 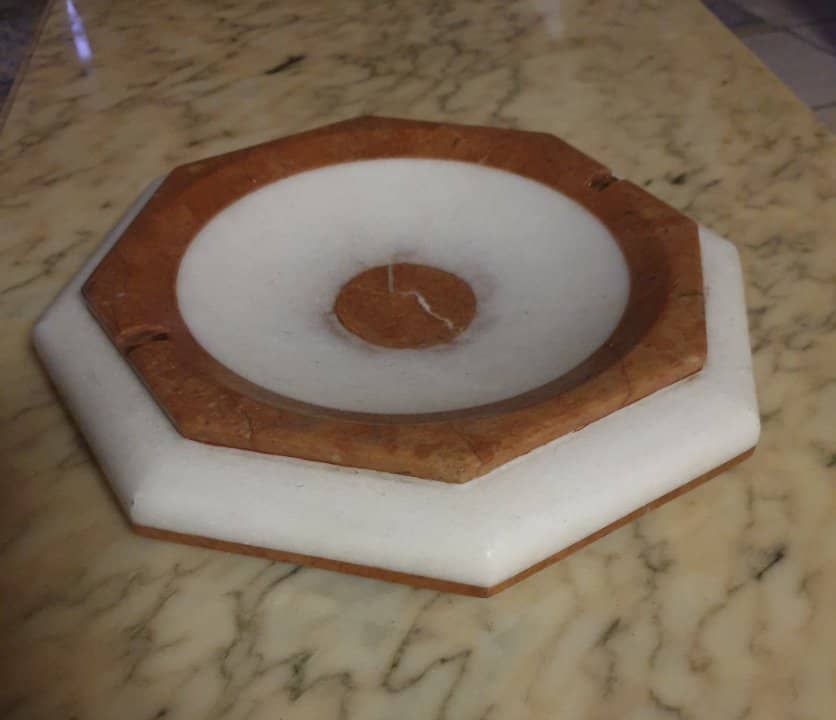 If Patrick could pass on some of his life’s knowledge it would be to those with stone floors. To renew rather than destroy.

“Your floor is beautiful.

“I say to people, your floor is beautiful, there is a new skin under the old skin, I can take a millimetre off and it will be even better than when it first went in. The cost is less than half, the finished job is better, and we don’t have to keep putting holes in the Earth.

“You know Michelangelo? There is no more of the Carrara Bianco P he used. It is all gone.“Eventually a lot of things will get depleted. Quarrying also uses lots of water, means huge truck traffic, damage to the environment at quite a lot of cost. Rejuvenating the floor saves all of that.”

With floors left honed, or as shiny as mirrored surfaces Patrick now finds clients astonished and in awe of the stone that lay beneath their feet all along. It brings him immense pride to share these moments with customers and to let stone floors be the grand statement piece they always should be.

I was using a porous travertine for tile line and coping. Recommended. Professional job. Great communication and quick efficient service. Highly recommend for any work within the scope of Patrick’s company.

Our beautiful mosaic marble floors get very dirty with everyday traffic. After one phone call Patrick came to see us, and has been there every step of the way, helping us seal the floor and then maintaining its beautiful look and finish. Amazing clean mosaic floor and protection to keep it looking amazing for years to come. Patrick is always reliable, showed up when he said he would, and on top of that he knows his stuff. He has helped us maintain our beautiful mosaics, and always offering his expert advice moving forward. Anytime I’ve contacted Patrick he has been so reliable, on time, and cares about the looks and finish of each job as well as the up keep. I couldn’t recommend Patrick highly enough. We are proud to refer him for the wonderful work he has done so far, and we will continue to work with him in the future.

We had a large pool area paved with sandstone which had grout falling out and the tiles had gone mouldy. We were recommended to use Patrick. The stone tiles were cleaned, old grout removed by machine, new grout installed then tiles were re sealed. It looks fabulous! Yes, Patrick has a lot of knowledge on how to treat and maintain stone. The job was completed in a timely manner and great results.

. . . Over the past three years we have utilised Patrick for stone work at a number of our businesses premises and in our home. We have always found Patrick to be honest, reliable and knowledgeable and his workmanship and attention to detail is impeccable. If, on the rare occasion, there was an issue Patrick was only too willing to promptly return and rectify the issue. We have not hesitation in recommending Patrick and Nu Stone Care. .

We appreciated Patrick’s professional approach to cleaning and repairing our internal and external tiles. He went beyond expectations and even made the effort to purchase on our behalf a cleaning instrument to support us in the upkeep of the tiles. We recommend his service with confidence. Waterproofing, repair and clean tiles inside and out. The service offered is of a high standard.

All photos are Patrick's work.